You might have noticed a small change when running the dmesg command in Ubuntu 20.10 Groovy Gorilla, since it now errors out with:

Don’t worry, it still works, it has just become a privileged operation, and it works fine with sudo dmesg. But why the change?

Well, I happen to be the one who proposed for this change to be made, and followed up on getting the configuration changes made. This blog post will describe how it slightly improves the security of Ubuntu, and the journey to getting the changes landed in a release. 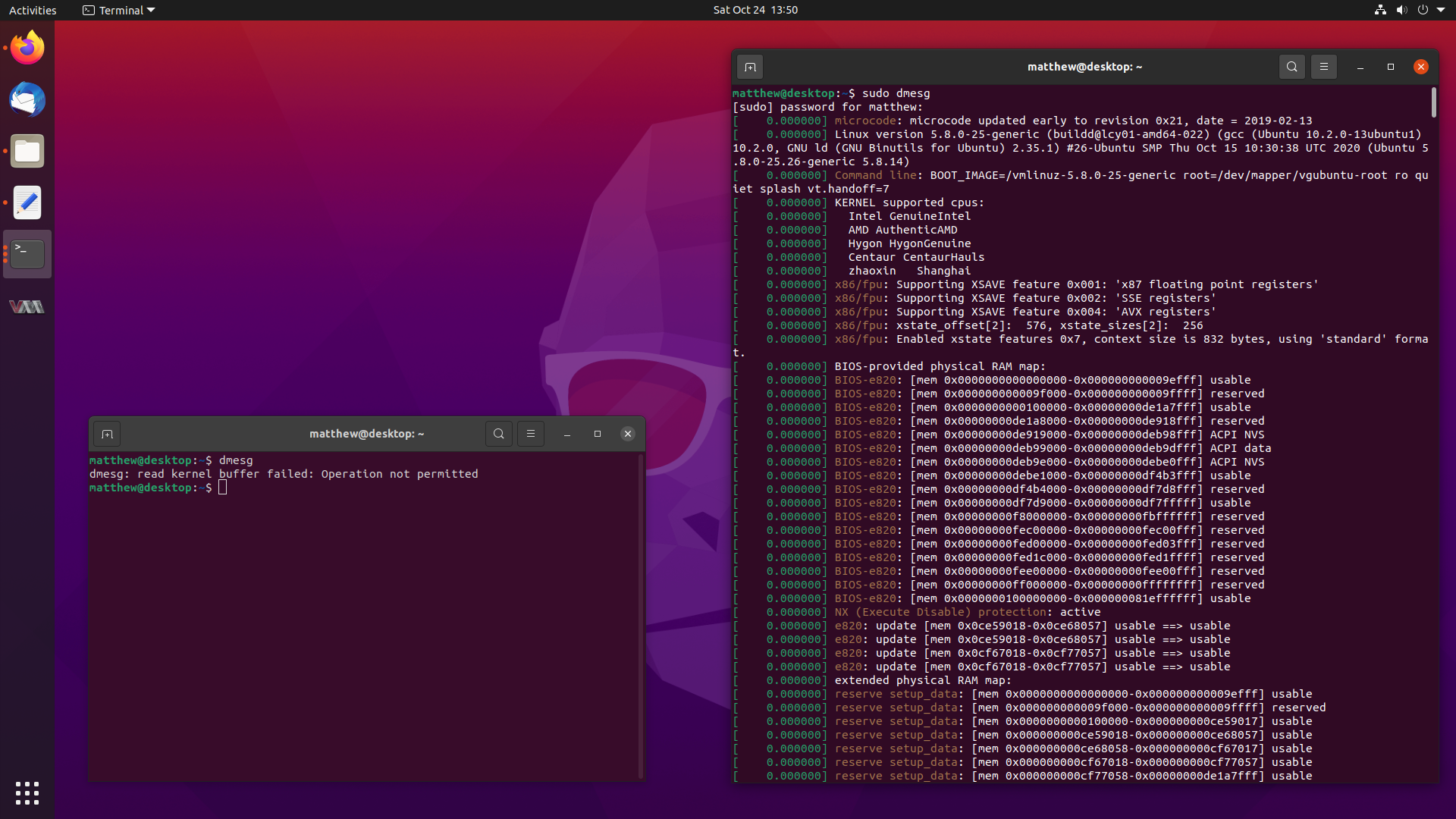 So stay tuned, and let’s dive into dmesg.

dmesg is a command that allows you to view the kernel log buffer. The kernel log buffer contains a whole wealth of information about system hardware, devices attached and their allocated memory regions, and error logging for the system.

This log buffer usually lives at /dev/kmsg or /proc/kmsg, which is what tools like dmesg or journalctl or various syslog programs read from.

If we look at some typical start-up information, it really isn’t too interesting. 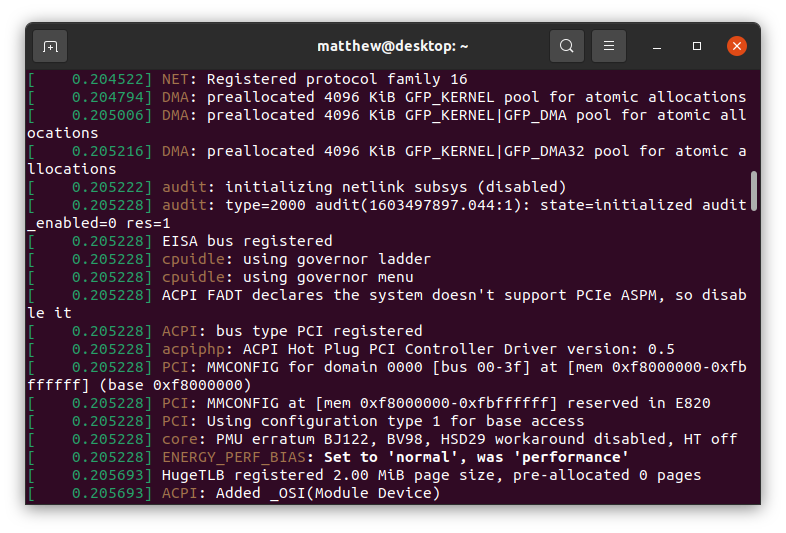 Why is restricting dmesg important?

These days, all %p format strings hash the kernel pointer, so the address itself is not leaked, but still gives a unique identifier for developers to look at when doing printk.

However, kernel pointers can still be leaked in other ways, such as if the system suffers an oops, it will print the current kernel stacktrace, as well as provide a copy of register values:

If kernel pointers happen to be in the registers at the time of oops, they get leaked to the kernel log buffer.

Kernel pointers are valuable to attackers and exploit developers, because they act as information leaks. These information leaks make it much easier to de-randomise the kernel base address and to defeat KASLR. If an attacker is trying to launch a privilege escalation attack against a recently compromised host, they can also use dmesg to get instant feedback on their exploits, as failures will cause further oops messages or segmentation faults. This makes it easier for attackers to fix and tune their exploit programs until they work.

Currently, if I create a new, unprivileged user on a Focal system, they cannot access /var/log/kern.log, /var/log/syslog or see system events in journalctl. But yet, they are given free reign to the kernel log buffer.

Strange how an unprivileged user can read dmesg just fine, and yet cannot access any other kernel logs on the system.

I sent a proposal to ubuntu-devel in June which outlines the above problems, to gather some feedback and to see if anyone else thinks that this is a good idea. 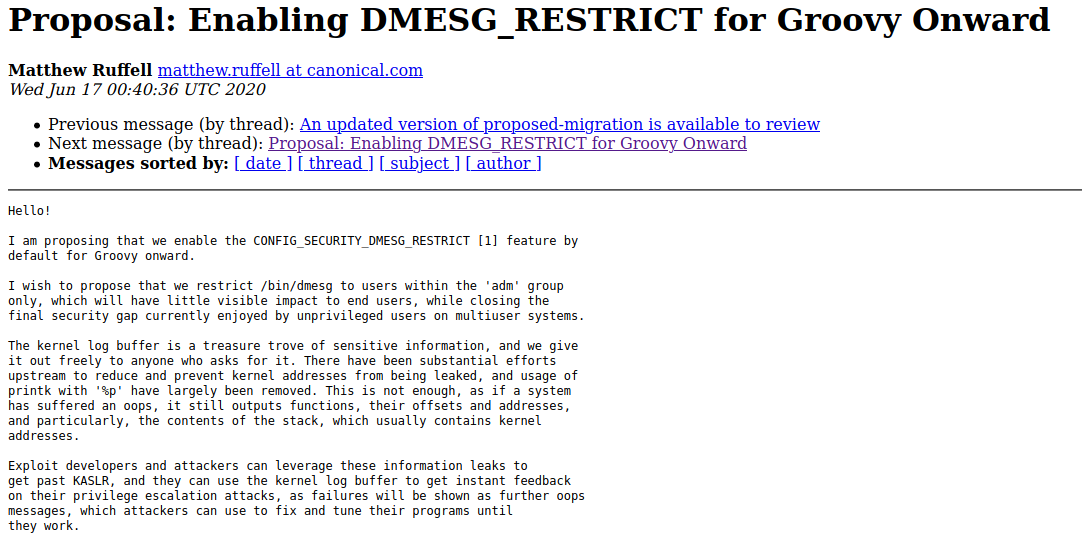 Let’s break these down.

Number 1 is how DMESG_RESTRICT gets enforced, as setting CONFIG_SECURITY_DMESG_RESTRICT=y in the kernel config restricts the kernel log buffer to executables with CAP_SYSLOG, or root privileges.

Number 2 allows users in the adm group, also known as “administration”, to be able to execute dmesg without becoming super user, which means nothing would change for default users in most systems.

Number 3 adds a easy way for system administrators to disable the change if they want.

I filed a Launchpad bug to document the changes and track the patches I had created for util-linux and procps.

Early Responses and Getting the Kernel Config Changed (1)

The security team were +1 with the change:

When I woke up the next day, the strangest thing happened. Phoronix had written an article about my proposal!

Ubuntu 20.10 Looking At Restricting Access To Kernel Logs With dmesg

This wasn’t expected at all, and it got people talking about the change in forums, instead of it just being silently made and me hoping that no one noticed.

After that, Seth Forshee, from the kernel team, double checked with the security team, and then went ahead and applied the change to the “unstable” kernel tree, since Groovy’s kernel had not yet forked off from it at that point in time.

The kernel commit is:

Now that the configuration change was made in the kernel, Number 1 in the list was completed.

At this point, things got a bit stuck. I got busy and no one else replied to my previous posts, so the changes to util-linux got a little delayed.

I restarted these talks with the below message to ubuntu-devel, and included the upstream Debian maintainers to the CC list.

This was successful, and Chris Hofstaedtler, wrote back. Chris asked if this had been discussed before in Debian:

I responded with what I could find, but I also mentioned that I would write to debian-devel.

So, I went and proposed similar changes to debian-devel in this thread:

I got some positive responses, but the most interesting one was from Ansgar:

Ansgar mentioned that if /bin/dmesg is granted CAP_SYSLOG, and /bin/dmesg was opened up to users of group adm, then any user of adm could clear the kernel log buffer by running $ dmesg --clear.

Now, I had missed this, and it was an excellent catch.

We don’t want to make it easier for anyone to clear the kernel log buffer, since it can be used to hide an attackers presence, so adding CAP_SYSLOG to /bin/dmesg is a bad idea.

Chris mentions this in his message back:

From there, Steve Langasek also mentioned that it was a bad idea:

and with that, I decided to drop the idea of adding CAP_SYSLOG to /bin/dmesg and changing the group to adm:

That makes Number 2 on the list struck off. It’s a bit of a pity, since it means that users in group adm have to write $ sudo dmesg instead of $ dmesg. Hopefully it won’t be too much of a bother to become superuser to view dmesg. Time will tell I suppose, and most distros follow this behaviour anyway.

Shortly after the upstream util-linux discussion ended, Brian Murrary sponsored my patches to procps to add some documentation about CONFIG_SECURITY_DMESG_RESTRICT and instructions on how to disable it by changing a sysctl variable. 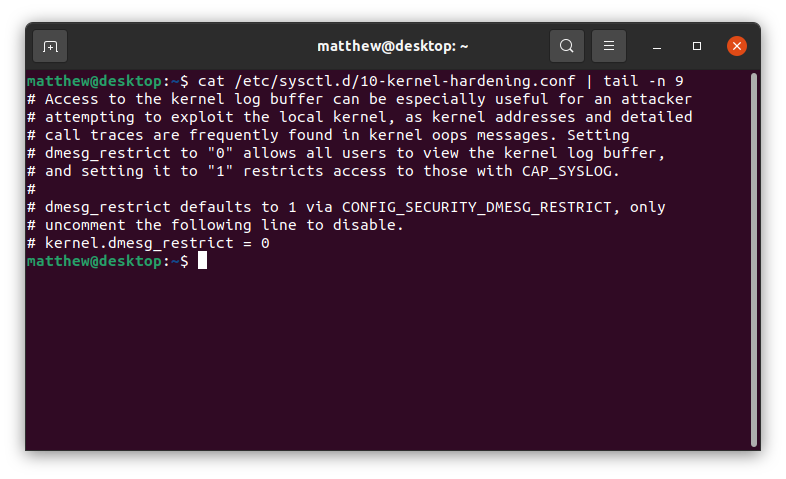 As my description states, if you want to turn off DMESG_RESTRICT, you can do so by uncommenting the sysctl string kernel.dmesg_restrict = 0, and rebooting.

That is the story of how DMESG_RESTRICT was enabled in Ubuntu 20.10 Groovy Gorilla. We covered how it slightly improves system security by removing an avenue attackers could use to view leaked kernel pointers, the process of getting all the separate changes landed, and relevant upstream discussions.

I hope you enjoyed the read, and if you have any questions or comments, feel free to contact me.